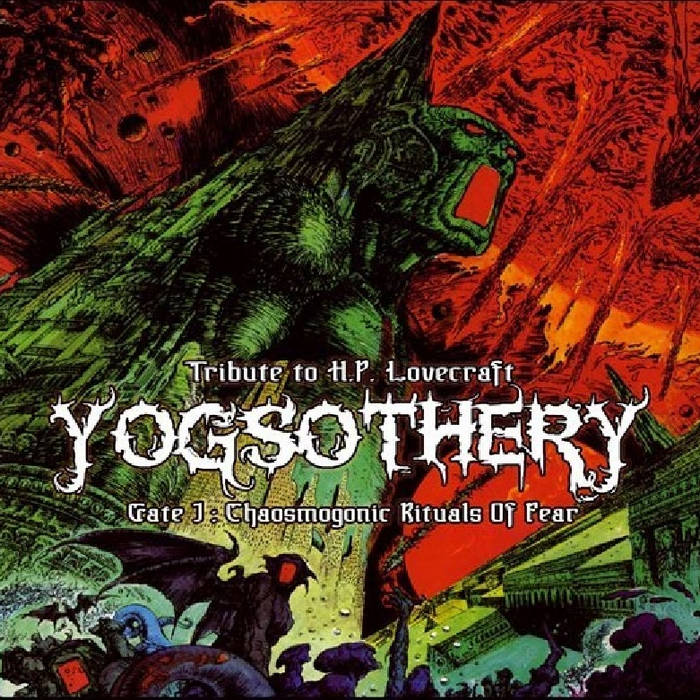 "Sometimes, in the throes of a nightmare when unseen powers whirl one over the roofs of strange dead cities towards the grinning chasm of Nis, it is a relief and even a delight to shriek wildly and throw oneself voluntarily along with the hideous vortex of dream-doom into whatever bottomless gulf may yawn."
H.P. LOVECRAFT

"Chaosmogonic Rituals Of Fear" is the first volume in the YOGSOTHERY trilogy of metal tributes to the genius of Howard Phillips Lovecraft and his literary creations. 120 years after his birth, 4 underground bands passed the Gates of Unknown to distill their Lovecraftian cosmic visions of horror and madness in 4 monumental tracks, exclusive to this release.

Six years ago I asked his tentacular majesty .M. of the mysterious Yuggothian cult called Aarni, how he felt about the idea of a Lovecraftian project without any rules or restrictions. Two months later “Lovecraft Knew” dropped on my slimy doorstep. Other selected individuals joined this merry little trip and slowly over a period of three years, this dark beast was conjured forth. And what a bloated monstrosity it has become…

From the first treacherously tranquil tones of Jääportit’s slow descent towards the spawning pits of He who is named the source and the end. The ritualistic summoning of the Goat with One Thousand Young, rumored to be invoked by Umbra Nihil in a dilapidated house looking out on the shores of a Finnish mirror version of Innsmouth. The utter madness that is Aarni reminding us of certain mountains in the Antarctic wastes with its forgotten inhabitants piping Tekeli-li or worse, that plateau that exists in two dimensions better left in the mists of myth. And then drifting on the brink of insanity, standing on the edge of the abyss, the relentless drones of Caput LVIIIm strips you of what is left of your feeble mind and you fall screaming mouthless into cold empty space. Too horrible to see the light of day, it was buried deep beneath whispering sands… almost forgotten.

I hope that you, the listener, will find enjoyment in the rather unique atmosphere that the artists have managed to create on this album. Though it consists of four very different and highly personal approaches to and visions of what has become termed as Lovecraftian, they compliment each other in ways that strangely enough feel like a single entity in the end.
I kind of fancy the old gent from Providence having the smallest trace of a smile hearing this… rude noise, ugly degenerates for sure, but that little curling of the lip… bullshit of course, but it makes me happy to think so.

UMBRA NIHIL is an obscure doomish metal act from Northern Finland. The birth of the band dates back to the year 2000. In 2002 a demo containing 5 slow melodic and melancholic doomy tracks was recorded and sent to some chosen labels and magazines. Later on, during the same year, the songs were released on a split with Aarni by the newly born label Firebox Records, which offered the band a deal. Umbra Nihil’s debut album "Gnoia" was released in July 2005, then it was time for the band to get back to the shadows to rethink and redefine their sound. "The Borderland Rituals", Umbra Nihil’s second full length release, seems like a musical mongrel mostly drawing influences from slow doom flavoured metal, 70’s prog rock, zeuhl, Voïvod and maggot-infested heavy metal in general. In epileptic fits of pathetic rage the band raises a trembling and arthritic pale fist at the uncaring cosmos-at-large and its malevolent nightside entities, which haunt hapless Mankind with unfathomable purpose - or lack thereof. Mostly, however, the aural ambience resolves in resigned rudderless levitation towards inevitable mental and physical disintegration.

CAPUT LVIIIm is the name of a one-time-only project created in 2004-2005 by various members of the necro-doom entity Malasangre with the complicity of Tronus Abyss' guitarist Mord, and the singer from the avant-garde extreme metal act Necroart. Since the beginning, the aim was to record only one track, a monumental suite to be featured on a secretly assembled tribute to H.P. Lovecraft. During its 30 frightening minutes, "Resurgent Atavism" re-defines Electric Wizard's space doom style from an ambient-drone perspective, with more emphasys on the occult and esoteric component of sounds, and with a strong black metal attitude.
The project takes the name from an imputation against the Templars during a violent repression ordered by the King of France together with the Catholic Church. According on different theories, Caput LVIIIm could have been a Baphomet, or a majestic golden figure; a virgin, or a crowned old man; a be-headed creature, an androginous figure, or an aries head...
But no matter how it was depicted, Caput LVIIIm is a symbol that transcends its own meaning.

I, Voidhanger Records dedicate this release to Druillet, and to all the abysslookers and chaosophers out there.