The Fire Cult Beyond Eternity 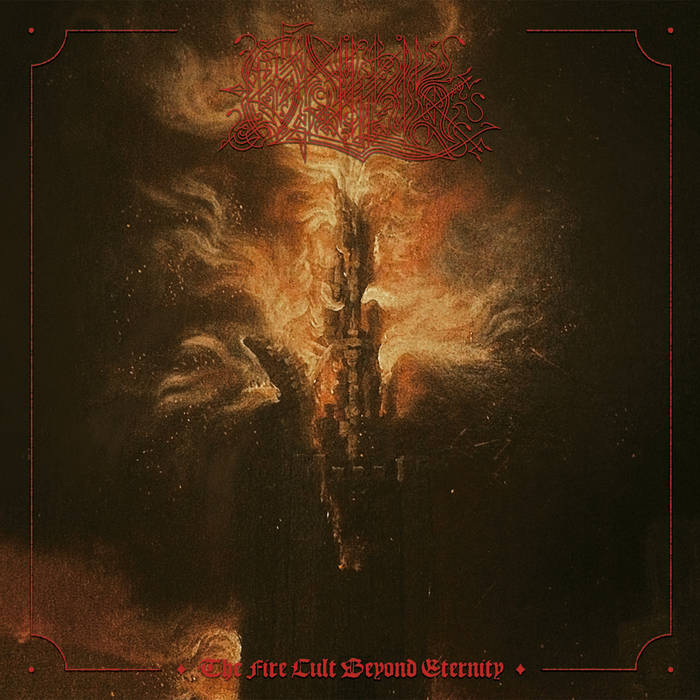 Ippocalyptica I had to give The Fire Cult Beyond Eternity three listens before deciding whether I liked it, at which point I decided that I loved it - but I understand that this will not click with everyone because it is more complex and demanding than is immediately apparent. This is compounded by the fact that there are no immediate contemporary reference points (read: this is as original as black metal gets without going too avant-garde). Embrace this odd ritual and give yourself to Onirik! Favorite track: Melodies Of Reflection And Praise.

RMT Holy shit, is this an outstanding piece of prog-black metal. The approach is like if Vicotnik and Greg Chandler collaborated on an album.
The arrangements are on another level. Favorite track: Murmurs Of The Aging Vessel.

"The Fire Cult Beyond Eternity" is the new album from ONIRIK (Portugal), a follow-up to 2015's "Casket Dream Veneration" and yet another proof of the talent of Gonius Rex, the band's sole member. ONIRIK has been active since 2002 and throughout the years has explored black metal in several approaches, always faithful to its original purpose: the emission of unordinary, dissonant and raw outputs with trance-inducing atmospheres, typically very cold and bathed in magic.
With the special guest participation of none other than Dirge Rep on drums (GEHENNA, ENSLAVED, ORCUSTUS, THE KONSORTIUM), and mixed & mastered by Semjaza of THY DARKENED SHADE, "The Fire Cult Beyond Eternity" is the consequence of the descent and return from below carrying the flames and lava on its scales, giving it back to the world in posthumous vengeance.

The album is definitely a cornerstone in ONIRIK’s career, as each and every note is a direct expression of the poetry being sung in utmost contempt, as if the melodies and harmonies were built to emphasize the dramatic verses in a demiurgic fashion. Its magniloquent guitars chaotically tangle around the often crazed and inspired bass lines which are, according to G.Rex, one of the album's highlights: "It was something rather unexpected but astoundingly rewarding," he comments, "the grave lines viciously deconstruct the guitar chords and wistful melodies."

Complementary to the "A Cor do Fogo" album by NOITE, another G.Rex's project released in parallel and which represents a cleaner yet no less magical approach to the spirit of the flames, "The Fire Cult Beyond Eternity" is a more old-school, sinister and raw outcome than its predecessor. "With Dirge Rep's thunder and skin relentlessly vibrating the heights of the lower caves and wishfully widening the crevices, majestic fires are bound to tail even the highest towers in crude fashion," G.Rex says. "I have travelled beyond the casket and returned only to illustrate the certain retribution. This time the old ways flow deep like liquefied lava, ready to break the wounds of this earth and resurface in arsonists' bliss."

With "Casket Dream Veneration" you have descended; now it's time to re-emerge in violent heat and blazing thunders. It is time to illustrate the world burning, to embrace The Fire Cult Beyond Eternity.