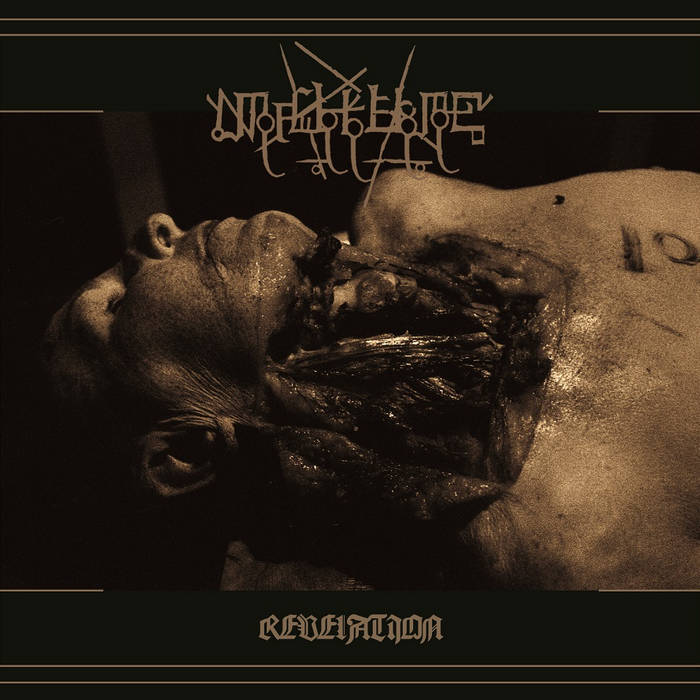 Saint Sébastien RLP A bell rings to open the celebration. Sinister psalms burst in a musical chaos to reveal the truth of Man. This opus is a rite close to an hysteric trance hesitating between the faith and the doubt. Favorite track: To Become Or Die.

Secretly assembled during the years, MALHKEBRE's "Revelation" is a manifestation of true Death worship in the shape of dissonant, razor-like riffs, cryptic and convoluted structures, tetanus-made melodies, and hysterical vocal invocations preaching the arrival of a new era of Transcendance, Devotion, Chaos, and Spirituality.

MALHKEBRE means true Satanic Resistance, the fist of the Devil in the face of Modern Society.

Malhkebre is the messenger, His messenger. Since 2002, the word of the Lord has been propagated by the sonic terrorism of four militants totally devoted to His cause: members of the sectarian organization “The Apostles of Ignominy.” Their art, which could be described as Orthodox Black Metal, is a profession of faith, an act of resistance to all forms of morals and humanism. Here a pagan and bucolic Satanism is out of the question. No snow-covered forests, only emaciated, charred stumps; no white wolves, except as carcasses rotting in the sun of a nuclear winter…

The group has distilled its venom sparingly, preferring to bide its time rather than unleashing a flood of poor productions. So far, a Cassette released privately for a small number of initiates; the "Prostration" mini LP, first in analog then digitally; a split with Aosoth in analog (2009); and now the first full-length album, "Revelation." On the other hand there have been numerous celebrations and a number of groups/brothers have partaken in the liturgies: Antaeus, Blacklodge, Alien Deviant Circus, Christicide, Destroyer 666, Embrace of Thorns, Hell Militia, Ofermod, Peste Noire… these concerts are veritable rituals that make an impression and never leave you indifferent.

Like a sonic mark, the message rests in your subconscious whether you like the performance or not. Malhkebre spreads His word and isn’t there to put you at ease, but to make you accept your paltry human condition through submission to the One.

Only then can you raise yourself in suffering… You deserve it.