Resonant Echoes From Cosmos Of Old 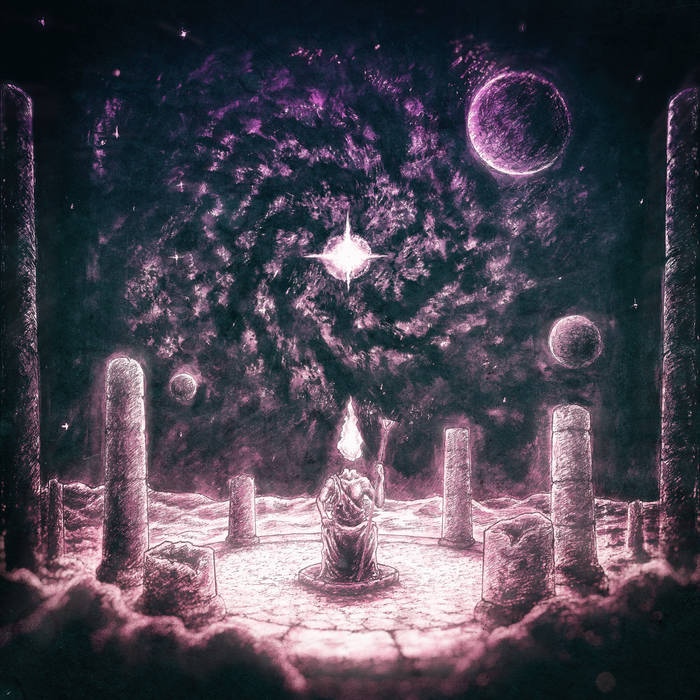 peps1999 Great album from start to finish... Thank you very much for your music!! Favorite track: Astrophobos.

Ben McKone Prometheus surge forth from the writhing chaos to deliver a masterful slice of blackened cosmic death metal. Prepare yourself for a sojourn through grotesque vistas human eyes were never meant to see. Favorite track: Astrophobos.

H.L. PROMETHEUS walk succesfully on the small line between black and death metal. The epic songs are sinister and mysterious, like majestic evocations of ancient entities. These demonic rites are often massive and heavy, but sometimes also slightly floating. The dark atmosphere of "Resonant echoes..." is remarkably dense, no matter which song (e.g. "The Crimson Tower of the Headless God") you choose to try out. Favorite track: The Crimson Tower Of The Headless God.

whatisthis8175 Definitely sounds like a call with the Outer Ones come to drop you right into oblivion.

canderton Refreshing and brutal with an unbelievably epic scope. It has an all-absorbing power, like an unforgiving, hungry vortex that sucks you in, never letting you go. There is also something vaguely (and genuinely) spiritual/divine that creeps through the darkness and appears here and there, which is now not commonly found in the genre. I'd say it's the best Extreme Metal album I've heard all year, that was released this year. Favorite track: Astrophobos.

After a couple of demos and a promising debut (“Consumed in Flames”, 2017), Greece's PROMETHEUS are back with their sophomore full-length album, “Resonant Echoes From Cosmos Of Old”, which expands and perfects the material of “Astrophobos”, an early 2020 digital EP. Carrying the heritage of both Hellenic and Scandinavian black metal (from early SEPTIC FLESH and ROTTING CHRIST to EMPEROR and SETHERIAL), PROMETHEUS do not disdain to combine it with the esoteric death metal of MORBID ANGEL and early ABSU, among the others.

“Resonant Echoes From Cosmos Of Old” is channeled in the mystical currents of black metal, with much more emphasis on darkness than in past works thanks to a pervasive – yet never overindulgent – symphonic feel that makes PROMETHEUS' music even more majestic and wrapping. Inspired by Lovecraft's myths of cosmic horror and his ancient, imperturbable gods of chaos dwelling in outer dimensions, the Greek band offers its unique visions of Azathoth and Yog-Sothoth in primordial and monstrous compositions, suffocating the listener with a strong grip of arcane invocations, cyclopian riffs and crushing rhythms of unbridled intensity.

Elsewhere, namely in the title-track and in the amazing closing number of “The Crimson Tower Of The Headless God”, PROMETHEUS hit the pedal and launch themselves in furious black metal accelerations, before hypnotic melodies carved by synths catch the senses and slowly flake off in the space vacuum in trickles of caressing psychedelic and ambient music.
Wrapped in an evocative cover by Dimitrios Ch. Kosmas, PROMETHEUS' “Resonant Echoes From Cosmos Of Old” is an album for voyagers of the unknown, not afraid to embrace the Infinite and get lost.

All music by Esophis. All lyrics by Aggelos, except for "Astrophobos" by H.P. Lovecraft. Additional synth by Qsnc (4, 6)