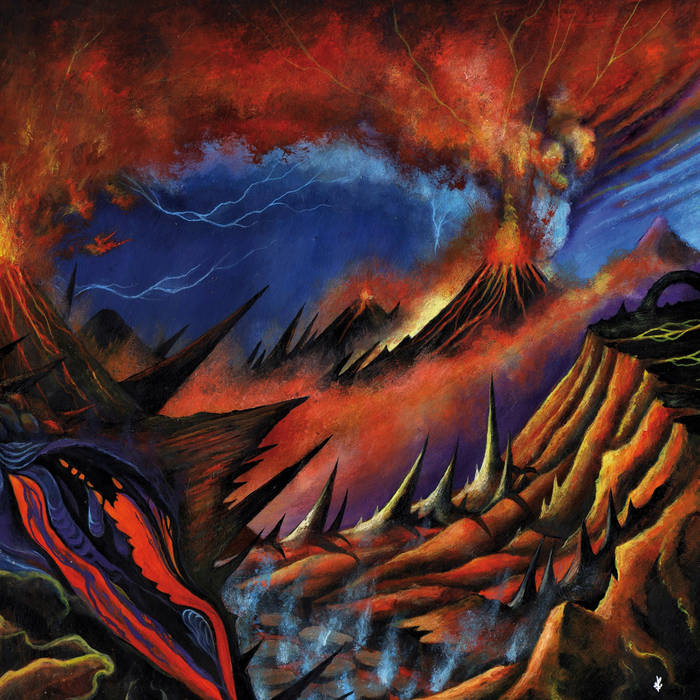 Cherubian Another great piece of atmospheric black metal from I, Voidhanger Records and although nothing can touch Spectral Lore it's very enjoyable indeed.

Hailing from Indiana, USA, and influenced by evolutionary anthropology and primitive myth, ECFERUS explore the psyche of early humans through a vehicle of exciting and unpredictable atmospheric black metal. Producing four releases in under a year, ECFERUS' sole member, Alp, has kept a prolific pace while exploring different musical approaches each time. With “Pangaea”, the band's second full-length album, Alp employs an unusual writing method, intermittently using letter substitution methods to create the impression of a lost primitive language. "Pangaea" continues Alp's musical evolution and represents a step up in composition and production skills while venturing into more progressive black metal territory.

Wrapped in a colourful cover commissioned to Romanian artist Luciana Nedelea, "Pangaea" uses a mythological point-of-view to tell the story of a planet at war with its occupants. The tortured main character, Pangaea, is ripped apart into separate continents by Earth so as to prevent the begetting of creatures with potential too powerful to be trusted. Acting out of spite, Pangaea nurtures humanity's rise to power until their passive occupation mutates into indefensible planetary malice. Using wide dynamic shifts and changes in meter, with “Pangaea” ECFERUS creates the musical equivalent of an accelerated planetary evolution, depicting the fury of the elements and an Earth painfully coming to life.

THE MYTH OF PANGAEA
the concept behind the album
by Ecferus

Once the Earth was young. She had three children, Land, Air, and Ocean.  Land was alone. His brother Ocean threatened him with storms and his sister Air was fleeting. Land felt so alone he created a world to keep him company. He created plants and trees but they were too quiet so he created animals that ran and hunted. The animals would grow and change and a million years later become something new. When Land grew bigger and stronger he took the name Pangaea. Finally Pangaea was not alone.

One day Earth became angry. She did not trust Pangaea’s new friends. She feared what they would become. Earth began to separate Pangaea’s animals by putting Ocean between them. Ocean was happy to oblige.  As Pangaea’s body was ripped apart into pieces and separated by miles of vindictive Ocean he swore to protect his animals at all costs. Pangaea found that the more fragmented his body became the more beautiful and interesting his animals became. One animal, the ape, became very strong of body and mind.  Pangaea wanted badly to appear powerful to Earth, Air, and Ocean so gave the ape everything it needed to grow and grow and become the smartest creature alive – the human.

Land and Air loathed the humans so made their home very cold forcing them to leave. Although the humans became weak and dwindled, they eventually made the entire world their home and became smarter than even Pangaea could imagine. They made Earth their resource and grew and grew. Pangaea was proud of the world he created and was sure the humans appreciated his gifts, but he was naïve to the truth. For every good and ingenious accomplishment the humans celebrated, an equally negative and destructive byproduct was produced. The other animals abided by the laws of Earth, but the humans created their own and expected the Earth to abide.

Earth was appalled by humans and weakened by their grand ambitions. They tapped resources but gave nothing in return. Earth plotted with Ocean and Air to torment and destroy the humans. Pangaea, once proud of his intelligent creatures, was now angry at them. He missed the world he once knew and grieved for it. He now joined Earth, Ocean, and Air – The Humans must abide by the laws of Earth or suffer consequences. So there the war began, weather versus machine, mountain versus weapons, Human versus Earth. And the storms continue on into the inevitable night…

ECFERUS is Alp - all instruments and vocals