Pandaemorthium (Forbidden Formulas To Awaken The Blind Sovereigns Of Nothingness) 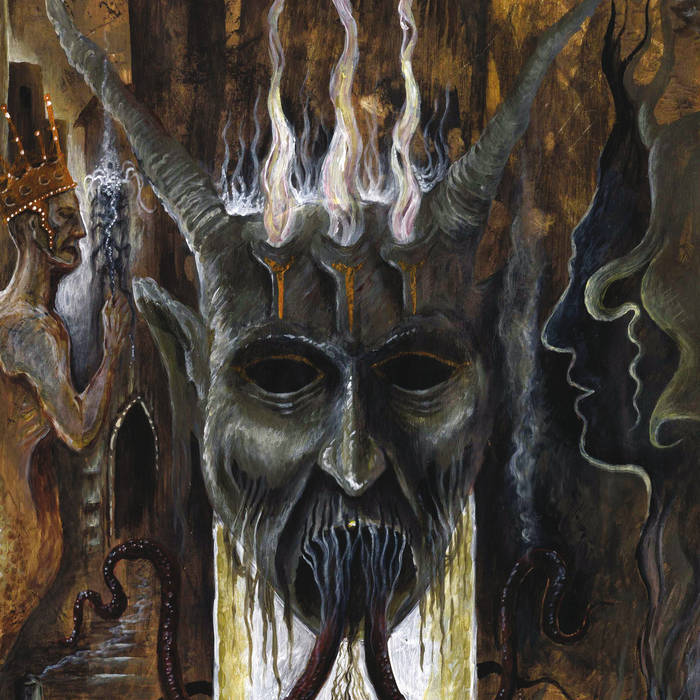 Ippocalyptica The list of high-quality one-man black metal bands is already quite large, and it has grown larger with the addition of Esoctrilihum, even though Pandaemorthium is significantly more of a death than black metal affair (as opposed to this project’s other works). This is occult and ritualistic death metal the likes of which we have not seen since Shaarimoth’s Temple of the Adversarial Fire, with an atmosphère so enveloping that nothing can escape its pull. Synths are used prominently but never overpower the phenomenal guitar work, which is simultaneously melodic and crushing. The vocal performance is also outstanding, full of guttural power and about as authentically evil as vocals get. Embrace the unknown, and lose yourself to the void. Favorite track: Nocturle Ars Fh'a.

Steffkrieg the Great Sometimes in my sleep I am dragged through moments of terror, rattled by confusion, and blanketed by an abyssal lack of consciousness. Through this tortured sleep, however, there are times where I feel I am tiptoeing on the precipice of the divine and otherworldly, which makes the entirety of the experience more profound and beautiful.

This album is almost like an aural representation of that experience for me. Dark, Damning, Divine.

Then you wake up and only recall the haunting echoes of the madness endured. Favorite track: Shaôg Ög Magthôth.

The Will to Power

Completely enshrouded in mystery, France's ESOCTRILIHUM debuted in 2017 with the promising “Mystic Echo From A Funeral Dimension”, the first stone of a titanic altar erected in the name of dark and majestic black/death metal. One year later, sole member Asthâghul returns from the shadows of his voluntary isolation to complete his unholy monument, and a new, more powerful ritual of cosmic death worship can commence.

“Pandaemorthium (Forbidden Formulas To Awaken The Blind Sovereigns Of Nothingness)” is the kind of mature and imaginative work that everybody was expecting from the band, a monstrous gate opened on nihilistic universes of unfathomable void. Instead of rehashing over-abused occult concepts, ESOCTRILIHUM create their own frightful pantheon and fictional dimension by mixing a biblical tone with evident influences from H.P. Lovecraft's evil cosmogony. Each song is a wound bleeding out mysticism, horror and madness; each riff, an invocation to ancient races and forgotten blind deities of chaos from higher planes of nonexistence, a plea for them to penetrate our dimension and devour us all.

“Pandaemorthium” is as ambitious in its conceptual scope as it is apocalyptic in atmospheres and sonic approach. Often bordering on savage death metal and dark psychedelia, Asthâghul's cyclopean guitar riffs and mystical melodies constantly entwine and concur to the album's grandeur, while deep growls and brutal rhythm patterns assault the senses and ruthlessly crumble the walls of reality around us, revealing immeasurable depths of utter blackness. And with it, the true purpose of our lives: to serve and feed the Blind Sovereigns of Nothingness.
To accompany ESOCTRILIHUM's arcane visions, Alex Shadrin at Nether Temple Design has provided some of his most inspired and diabolical paintings to date, a perfect match to the unspeakable horrors of “Pandaemorthium”.

Written, performed and recorded by Asthâghul in 2017

If you like Pandaemorthium (Forbidden Formulas To Awaken The Blind Sovereigns Of Nothingness), you may also like: