by MOSS UPON THE SKULL 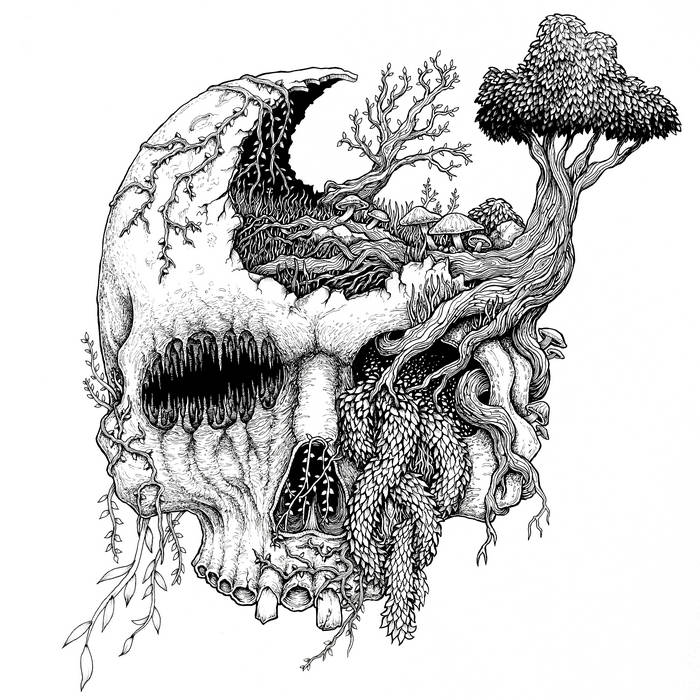 Matthew Toye One of the most interesting death metal albums I've heard in a while. The band really goes outside the usual tropes of the much beloved genre and reach for the multitude of possibilities and find success doing it. Favorite track: The Serpent Scepter.

Arrogant Bastard This is an absolute gem! A sterling example of musicianship and template I hope they continue to explore.
A death metal base, embedded with elements of thrash, doom, black, and hints of progressive. The guitar tone is exceedingly alluring. While most bands adopt a "moar distortion equals moar heavy" mentality, these raucous gents tantalize with chunky, bright, almost '80's thrash tones and still bring down the house with the heavy. Favorite track: The Serpent Scepter.

Ippocalyptica I, Voidhanger has an exceptional stable of black and death bands that skew toward the eccentric and progressive, and Moss Upon the Skull might just be one of the best pure death metal artists in its stable of talent. This is quite varied and thoughtful death metal that weaves effortlessly and adventurously around its central ideas without ever losing coherence or the listener’s interest. Riffs are heave and chunky, drums are pummelling, vocals are destructive - this is all-around well done! Favorite track: Unseen, Yet Allseeing.
more...

LAWN OF THE DEAD

Belgium's MOSS UPON THE SKULL emerged in 2010 from the same swamps on which Brussels was founded, with the intent of playing unconventional, progressive death metal with a strong focus on philosophy, spiritualism, decay, and the mysteries of nature and the after-life.
After two promising EP's, the band is back with a revelatory first full-length, “In Vengeful Reverence”, heavily influenced by esoteric, alchemical principles and alternative history, as put forward by luminaries like Michael Tsarion, Terrence McKenna, Aleister Crowley, or John Dee. “The album title refers to dealing with frustration, hardship or threat, not in an emotional way but with serene rationality, in order to overcome the adversity and remove the cause of the challenge,” explains singer/guitarist Jef Van de Weghe. “The blue flame concept informing the album represents the release of anger and frustration in a constructive and creative way. It makes sense to channel these energies into manipulating the world around us to serve our purpose, call it magick or willpower.”

Music-wise, MOSS UPON THE SKULL's dissident death metal takes inspiration from the works of GORGUTS, PESTILENCE and MORBID ANGEL, among the others, but the Belgians enrich the intricate structures of their music with black metal nuances and unique melodic flourishes, while a superlative and overtly technical rhythm section works in unison with inventive guitars, aggressive growls and sporadic dark synths.
A perfect equilibrium of brutality, elegance and creativity within a death metal context, “In Vengeful Reverence” is surely going to put MOSS UPON THE SKULL on the map of today's most original metal bands.

All music by Moss Upon The Skull.