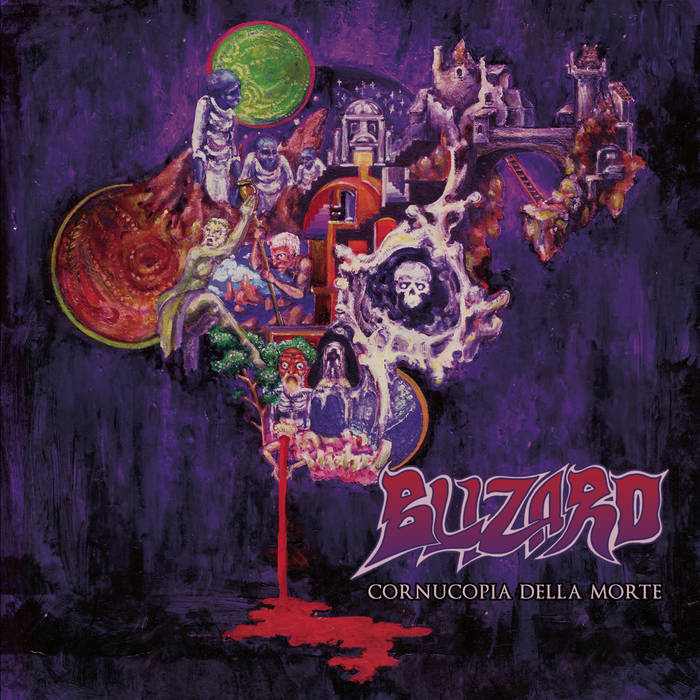 il-kor If you like horror movies and doom music, this is your band! Favorite track: Giallo.

Sonny92 An album of eccentric trad doom, heavily influenced by the Italian take on the genre, as practiced by the likes of Paul Chain et al. If you enjoy quirky, synth-laden, hard-rock based doom, that simply refuses to become boring, then this is heartily recommended.

wildman615 All hail this fucking band! Johnny is a doom wizard. Giallo is probably the greatest prog rock song that will EVER exist.

Will Johnston One of the most unique and engaging "classic" doom albums I have heard in years. Favorite track: Giallo.

John Gallo, the unsung American master of horror doom, is back with the long-awaited sophomore album by BLIZARO. No less adventurous than its predecessor (“City Of The Living Nightmare”, Razorback Rec. 2010) or the “Strange Doorways” collection of demos and rarities (I, Voidhanger Rec. 2013), "Cornucopia della Morte" is however more powerful, dynamic, focused and refined; a mature effort from talented musicians that worked in perfect harmony.

Written and recorded in 2013, the album was then shelved to make room to Gallo's uncontrollable bursts of creativity which lead to JOHN GALLOW, a solo project that debuted on I, Voidhanger Records in 2014 with the acclaimed doom masterpiece “Violet Dreams”. Now that BLIZARO are writing new material, “Cornucopia della Morte” has been called back from its provisional grave and wrapped in an imaginative cover painting by Dan Bell which perfectly captures BLIZARO's penchant for all things horror, doomy and weirdly dark.

Driven by Gallo's rip-roaring guitar-playing and slanted vocals, and by the formidable rhythm section of Mark Rapone (bass) and Mike Waske (drums), “Cornucopia della Morte” conjures up the ghosts of Goblin, Black Sabbath, Paul Chain, Pentagram and Candlemass at the crossroad of doom, prog, psych rock, heavy metal, and the Italian horror soundtracks from the 70's.
The album features 8 new BLIZARO songs, plus a shattering cover of "Voyage To Hell" which preserves the dark and menacing aura of the original by Paul Chain Violet Theatre.