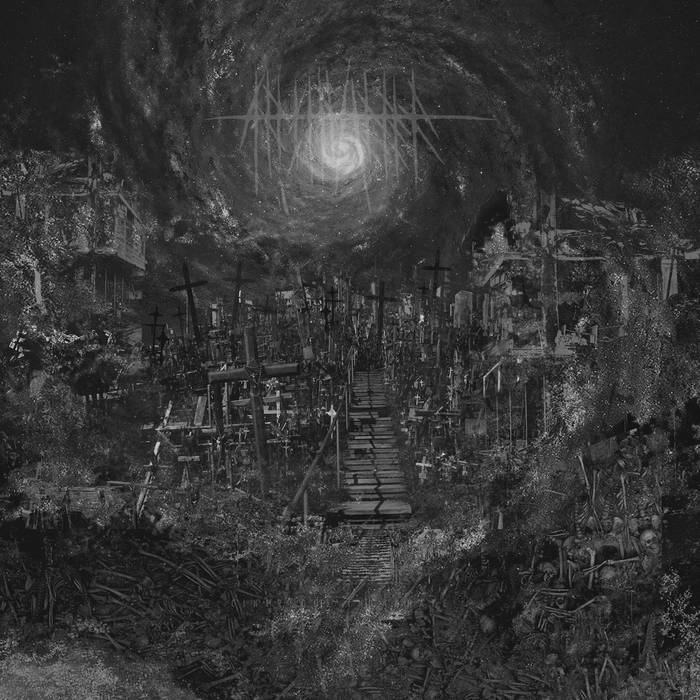 Dave Aftandilian Here at the end of days, we scream without ceasing, until the ashes from the burning of the last remnants of civilization fill our mouths. If only our deaths were to be so easy. One by one each person we love is torn limb from limb, each sheltering oak is burned to charcoal, each bright hope fades to greasy dust. Rejoice, for at last the end is nigh.

Eight years into their existence, Oakland CA’s dark doom destroyers ABSTRACTER return with their third full-length album, “Cinereous Incarnate”, essentially their own soundtrack to the end of all that is. Unraveling a blood-curdling sonic ordeal about a nightmarish dimension cursed to eternal twilight, where reality is torn to pieces and existence is reduced to the final stages of survival, ABSTRACTER describe a world in which the lines between life and hell have been vaporized as existence sinks into a tormented shadowzone obscured by falling ash and nuclear fallout.

Through a suffocating deluge of colossal riffs and dismal atmospheres that defy any clear categorization, ABSTRACTER’s hallucinated and apocalyptic music oozes with an immanent and oppressive sense of defeat and of unravelling hope, fusing together crust, black, doom, death metal, and cancerous strains of noise, drone, and dark ambient. “Cinereous Incarnate” is a catastrophic album, an oppressively apocalyptic and hallucinatory listen. At the core of the earth-shaking sonic annihilation of the music lies a vast and intelligible plethora of influences ranging from Blut Aus Nord, Dystopia, Swans, Disembowelment, to Sutekh Hexen, and Celtic Frost. ABSTRACTER have coerced them together and collapsed on top of each other to erect an obsidian black wall of monstrous sound that levitates out of solid darkness. It crushes and devours everything in its path, and conjures the same nightmarish and antihuman atmospheres of bands like Dragged Into Sunlight, Indian, Primitive Man, Krypts, Coffinworm, and Triptykon.

Recorded and mixed by Greg Wilkinson at Earhammer Studios (Vastum, Undergang, Acephalix, Autopsy) in Oakland CA, and mastered at Audiosiege in Portland OR by Brad Boatright (Nails, Wolfbrigade, Full of Hell, Vallenfyre), “Cinereous Incarnate” comes with an appallingly dense, layered, and oppressive production, and features haunting dark ambient soundscapes and noise contributions by Sutekh Hexen’s own visual/noise luminary Kevin Gan Yuen (who also curated the album’s apocalyptic art) and by San Francisco-based dark industrial musician Only Now - an unholy alliance which has yielded a sonic behemoth unlike anything else with an absolutely annihilating and otherworldly sound.

A monumental achievement in extreme doom, ABSTRACTER’s “Cinereus Incarnate” is a work which unifies every concept of sonic oppression imaginable and which is set to be one of the most helplessly darkening and soul-crushing albums released this year in the realm of fringe strains of doom, death, black, drone metal, crust, and beyond.