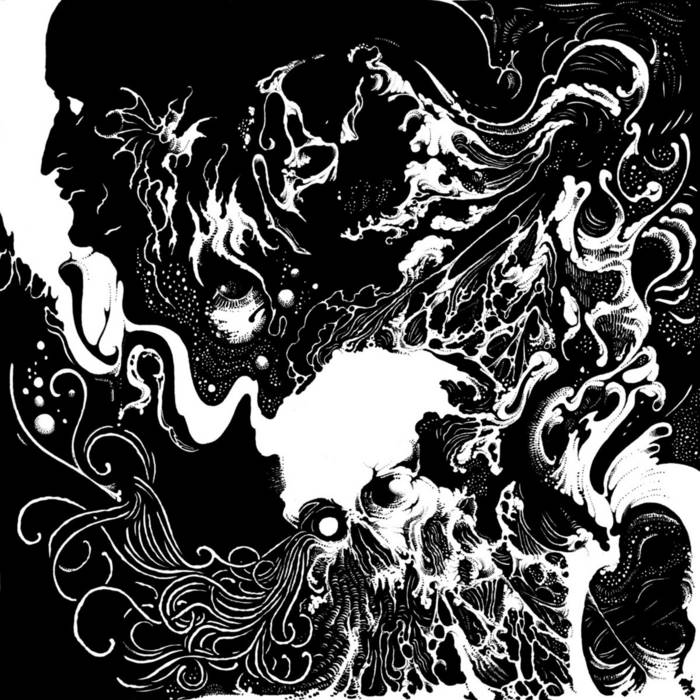 Wrapped in a phantasmagoric cover drawing by the inimitable Karmazid, “Безглуздість!” (Absurdity! In Ukrainian) is KRUKH's debut album, originally released on vinyl by Fallen Empire Records and now also available as a luxurious Digipack CD under the I, Voidhanger Records banner.
But who is KRUKH? Lead by the visionary talent of Ukraine's Markov Soroka (TCHORNOBOG, AUREOLE, DROWN) on guitar, bass and vocals, the band features the thunderous drumming of Shawn Eldrige (DEATH FORTRESS, RUINOUS, ex-DISMA, ex-FUNEBRARUM) and the evocative guitars of Nyzam Salimbayev, hailing from Uzbekistan. "Nizam and I met each other and bonded over the fact that we were both strangers in a strange land, speaking Ukrainian, Russian, and English, trying to make our way. We just happened to both have an interest in black metal," Soroka recalls.

“Безглуздість!” is clearly influenced by their experiences as immigrants in the United States, and the clashing of the Eastern and Western views on life and humanity. Shawn Eldridge joined the band later. "We always knew we would work together on something,” says Soroka, “but it took an incredibly difficult and depressing winter of 2015 for us to finally be motivated enough to make something out of all of it. The result is an existential soundscape with which we make our mark with."

As STEREOGUM wrote, KRUKH's debut full-length “crushes, blazes, vacillates in serpentine fashion. In a booming voice it screams doomed proclamations into the abyss. Fans of the Icelandic black metal craze of late will hear some of the raw subterranean fury that tends to define the style in Krukh, but whereas Iceland’s best seem to burrow into volcanic rock, Krukh takes off into a troubled night sky where warbled guitar leads streak a dark tableau.”

All recordings by M. Soroka, except for drums which were recorded at Deaf Locust Studios by Brian Gawaski
Mixed by M. Soroka
Mastered by J. Buczarski
Artwork by Karmazid
Layout by Francesco Gemelli
______________
Cat. Nr. IVR108